Although now showing it's age to newer stadiums the stands in Progressive Field are built close-in to the field, and the stadium is conveniently located.

I decided a few weeks ago that I was going to go see an A's game. As a resident of Ohio it's not really easy to see sporting events for my favorite teams out west. The timezone, broadcast rules, and obviously, the market, are all against me. However I checked the schedule, and there it was, July 4th, the A's are up in Cleveland. I often enjoyed going to the July 4th games at the Coliseum for the fireworks show afterwards. Surprisingly this game in Cleveland was a day game.

Baseball, in the United States, is one of those sporting events you can go to with a friend, enjoy a beer and hot dog, talk casually, and enjoy the skill of the sport in front of you.

Progressive Field is a decent place. The stands are setup close to the field so that you have a good view of what's going on. What surprised me, however, was the state of Indians baseball. Nobody really cheered. Except me. For the A's. The bottom of the 9th inning got the most amount of cheer as fans started cheering to the tune of the Guardians drummer. I guess this is the culture of Cleveland sports. The Browns, Cavaliers, and Guardians have been a disappointment for a long time that northern Ohio has a depression. The only good thing about Cleveland Guardians fans is that most were dressed in team colors.

This is quite in contrast to my experience at Fenway Park, or merely standing outside Wrigley Field in Chicago where the streets were crowded and the fans were pumped. Chicago also has this sense of disappointment with its sports teams.

Aside from the strange atmosphere it was a great day for baseball, and the game was a 3-1 win for the A's.

Progressive Field is conveniently located in downtown Cleveland near the i77 and i90 interchange. There are numerous parking garages in the old brick office buildings around the ballpark. 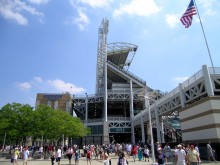 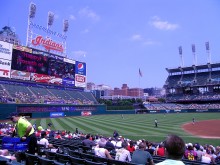 The Indians doing well in 2011

At the beginning of the current season, 2011, I noticed the same lack of fans in the stands at Progressive. However, in April, the Indians surprised everyone by jumping into the lead. It looks like they're a bit louder out there now.

I would like to go up for another A's game this summer and see if the noise level has improved for myself.