Louisiana seemed like a foreign country to me. Although I had been to Alabama in the distant, distant past, I was clueless. I am not a Spring Break or Mardi Gras traveler so Louisiana hasn't been in my mind. I saw the media depictions of Hurricane Katrina in 2004, but that was about it.

So I leaped at the opportunity to travel down there as part of an extended Thanksgiving vacation split between "Southern" and "Western" parts.

It's quite odd... I always seem to have the most interesting first days. This first day in Louisiana was memorable along the ranks of  the Tokyo Death March, the amazing first day in Sri Lanka which included the Pinnewala Elephant Orphanage, and another recent 2010 trip to San Francisco where overcoming the odds I stayed up until about 7am EST to party with a good friend. And part of what made this day so great was a stop by Jambalaya Shoppe for lunch!

I am a bit nervous when it comes to Cajun cooking. However, this particular meal was of the succulent barbecue side, which helped to relax me and increased my curiosity for the coming vacation. I always thought of Jambalaya as spicy, but much to my surprise Baton Rouge is more well-known for its barbecue variety.

Jambalaya Shoppe's almost-fast food Jambalaya is comparable to donburi (rice bowl dish) in Japan, and while eating pulled pork jambalaya I recalled much the same experience eating at Yoshinoya or Sukiya. Although Jambalaya Shoppe is a bit better on the taste scale.

There are many locations around Baton Rouge. See the Jambalaya Shoppe web site. 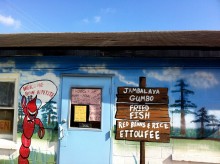 That is so funny to compare Jambalaya to Donburi!! I will be sure to describe it that way in the future!

This is the second entry I read tonight. And I am on my third. Got to think which one is next. Thank you.