This is one of my favorite temples when visiting Kyoto. Kiyomizu Temple [清水寺] is nestled in the east hills of Kyoto relatively close to Kyoto station [京都駅]. It can be one of your first stops in Kyoto after arriving either on the early morning train or if you got there in the afternoon.

I first visited in August of 1999 after spending three weeks in Tokyo at Sophia University. We arrived before noon after a shinkansen ride, checked into our hotel, and started marching up towards Kiyomizu. We didn't make it. That is to say, we needed to get lunch first. It was also raining. So we stopped into a traditional noodle shop for some soba noodles.

At the temple I stood clutching a white plastic umbrella in one hand and a Nikon camera in the other. I often think back to that moment and that picture with a fond memory. For years afterward I proclaimed to myself that was the best photograph I had ever taken. But apparently I dreamed that up in my head as I often did not have access to those photos. I recently found it a year or so ago, and as you can see it graces this pages as the destination logo.

The overcast sky is almost washed out and there's little detail in the scenery. Still this photo reminds me of being there for the first time in awe at the beautiful landscape and view of Kyoto from the east. In fact, in 1999, this was the only temple we had time to visit as we spent the next day in Nara. 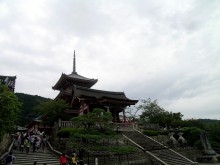 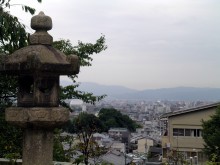 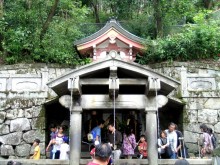