I'm a native Californian. I love snow. If I want this snow I would drive 3.5 hours for it early on a Saturday morning to catch first tracks (being the first down a slope with fresh powder on it). Somewhere in my life I moved out to Ohio. Although Ohio has snow, and sometimes plenty of it, it is flat. This makes for some terrible skiing. If you look at the states around it, they too are flat.

Pennsylvania is the closest state that has "mountains". But the skiing there isn't great either. I skied West Virginia once (it might have been western Virginia though). I drove to the top and skied down an "expert run" that should have been labeled an intermediate run. This is not a mountain.

So I discovered that the best skiing is in Vermont. Luckily for a few years I knew several acquaintances that liked to ski, and one of whom had a cabin up Smugg's. This is why this article is about Smugg's and not Stowe's or one of the other resorts in Vermont.

Smuggler's Notch is located up a tight valley about 40 minutes from Burlington. It has three "mountains". Now while I wouldn't call these "real mountains" the resort does get snow, and there can even be powder. The mountains are Morse, Madonna, and Sterling.

Now you probably noticed I haven't mentioned anything about lifts. Well there's your downside. Smugg's does not have anything other than two-person or rope-pull lifts. Apparently the mountain's too windy for anything else. I hear there are bears too. This is really disappointing if you're used to Sierra-Nevada, Rocky Mountain, or Canadian Rockies skiing.

But in the end skiing is skiing. The mountain is enjoyable, and if you have to ski out east Vermont is the best place to do it.

It's a little difficult to navigate to Smugg's if you're coming from out of town. If you're driving from afar you're probably going to get there late at night. While you're following your directions you'll be on the same street for quite some time, but it will take unexpected curves and turns. Just go slow and piss off the native behind you that are probably cursing you out as a flat lander. 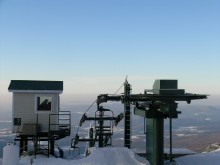 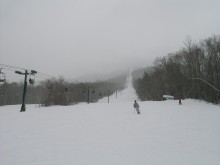 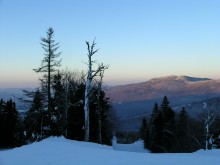 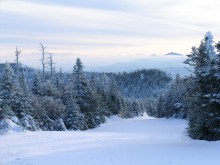 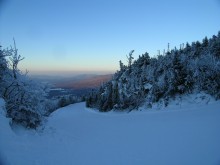